Huelva is the westernmost province of Andalusia (Spain). It was from Huelva's capital city that the 3 caravelles commanded by Christopher Columbus set forth to discover the New World. This circumstance is celebrated each year in a multitude of festivities, such as the "Fiestas Colombinas", the Iberoamerican Festival of "La Rábida" or the Iberoamerican Cinema Festival, among others.

Despite its bustling commercial activity, Huelva has some of the most important nature preserves on the Iberian peninsula, such as the National Park of Doñana, declared a Biosphere Reserve by Unesco in 1980, and the Sierra de Aracena y Picos de Aroche Nature Park, which boasts a wide range of Mediterranean vegetation including holm oaks, cork oaks, gall oaks and chestnut trees.

It is in fact in the Sierra de Aracena y Picos de Aroche that the iberico jamon production area controlled by the Producers' Association of the P.D.O. (protected designation of origin) Jamón de Huelva is located. The Association's central offices are in Aracena. 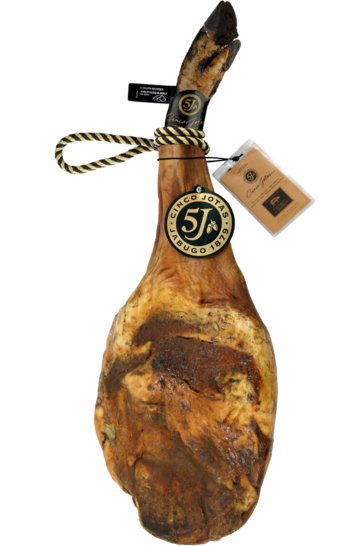 Iberian breed pigs come from different "dehesas" in Andalusia (Cordoba, Huelva, Seville, Cadiz and Málaga) and Extremadura (Caceres and Badajoz), but the jamon curing and maturation process is only performed in 31 municipalities of the La Sierra county, of which Jabugo is the most notable.

Characteristics of the Jamón de Huelva Designation of Origin

To be included under this Designation for the production of jamones and paletas (shoulder hams) pigs must be pure Iberian breed or a cross of 75% Iberian breed and 25% Duroc-Jersey breed.

For animals that eat a diet only of acorns and natural grasses during the finishing period (montanera) there can be no more than 1 pig per hectare, whereas for animals having a diet of natural forage supplemented with commercial feed during the finishing period a maximum of 10 pigs is allowed per hectare, with a minimum distance between water points and feeders of 100 metres.

Three classes of iberico jamones have been established according to pig breed and diet before slaughter:

Pigs must be slaughtered in the locality where they are produced; i.e., in one of the 31 municipalities of the Sierra de Huelva, from which they must not be removed until the minimum maturation period has been completed.

The natural drying process takes place in drying rooms located on the upper floor of meat production buildings, and maturation, in the bodegas found on the ground floor, or in the cellar, of those buildings. In both cases the microclimate conditions of the Sierra de Huelva are an essential part of the process, since both the drying room and bodega are ventilated naturally, and artificial changes in temperature and humidity are prohibited.

The minimum production time for jamones under these conditions, as stipulated by the Producers' Association, varies according to weight and grade, but for hind leg cuts it must be over 18 months, and for paletas (shoulder hams), over 12 months.

Adding the term "Jabugo" to the P.D.O.'s name

In 2008, the Consejo Regulador de la DOP Jamón de Huelva (Regulatory Board for the Protected Designation of Origin of Huelva Ham) requested to change its name to Jabugo Designation of Origin. The "Jabugo" brand is synonymous with quality jamon, and so is a very attractive proposition from a commercial viewpoint.

Along with other manufacturers from Jabugo who did not come under the DO, Sánchez Romero Carvajal (the Cinco Jotas producer) opposed the plan and managed to delay the change of name until 1 August 2015, when it was officially announced by the BOE (Spain's Official State Gazette).

In terms of quality, there is no great difference between curing jamon in Jabugo or in any of the nearby towns such as Corteconcepción, Cortegana, Cumbres Mayores, Aracena, El Repilado or Aroche, to name just a few. The maturation cellars in these towns impart the jamones with an easily recognisable personality, so it was expected that they would all be able to share in the renown of a name as juicy as "Jabugo".

The characteristics of the hind leg (jamon) and shoulder (paleta or paletilla) hams of the Jamón de Huelva Designation of Origin are:

The deep red colour that appears when the jamon is cut is due to the fact that these are free range animals of a relatively advanced age (18 months). Infiltration of the muscle fibres by fat is responsible for the characteristic marbling of Iberian pork products that gives them a soft succulence. The infiltrated fat is highly lustrous because of its low fusion point, essentially due to the acorn-based diet. The jamones' aroma and intense, persistent flavour are the result of their prolonged maturation period. Another feature of Huelva jamones is their low salt content, since the optimum climatological conditions of the region mean less salting time is required here than in other areas.

In 1996 the first year's production of Spanish jamones regulated by the P.D.O. Jamón de Huelva went on sale: a total of 3,842 jamones and paletas. The record was achieved in 2003, with 142,517 jamones, but D.O. certified production has gradually decreased since then.

An upturn took place until the economic crisis that broke out in 2008, with upwards of 100,000 jamones even being made, but production barely reached half that figure in 2014 and 2015.