Until now, all orders (whole, de-boned and sliced hams) are being dispatched in the expected times and the carriers deliver normally, with occasional delays. In United Kingdom (see other countries) we operate normally. #StayHome

Proper storage and preparation for serving are essential to enjoy the full flavour of jamones and the subtleties of their aroma. Following the suggestions below will allow you fully to enjoy Bellota grade Iberico Jamon, one of the world's great gastronomic pleasures.

Jamon should be consumed at room temperature, or about 21ºC. At this temperature the fat appears lustrous; when it is too cold, its appearance is more opaque.

Slices should be thin, of medium size, and contain a certain amount of the marbled fat that gives them their particular succulence.

In addition to its incomparable flavour, the nutritional properties of "bellota" quality Iberico Jamon make it an ideal complement to a healthy, balanced diet.

How to slice a hind leg cut ("jamón") 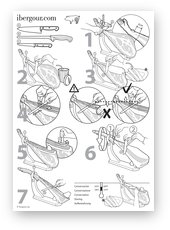 In specialty butcher shops and shops where Ibérico Jamon is sold it is possible to obtain machine-cut slices from boneless hams. Popular wisdom has it, however, that a good jamon should be sliced with a knife to obtain optimum organoleptic qualities for consumption.

Apart from the sheer pleasure of watching a jamon being trimmed, cut and presented in the traditional manner, it is said that machine-sliced jamon actually loses some of its aroma (Dr. R. Cava, teacher at the Veterinary Faculty of the University of Cáceres) and the characteristics that the fat lends it, due to the heat produced by the friction of the slicing blade against the meat surface.

There is no doubt, however, that the actual slicing of a jamon with a knife is part of the genuine, quality Iberico jamon tasting experience. It is a simple process too, with the right equipment. Nevertheless, certain safety measures should be observed.

Equipment you will need to slice a jamon 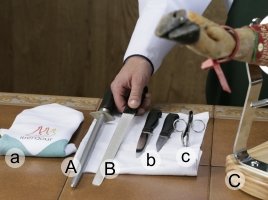 To slice an Iberico jamon properly it is essential to have a:

It may also be useful for you to have on hand a: 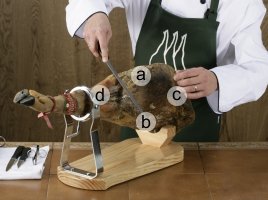 Parts of the jamon:

The ham stand should be placed at a height and position in which the jamon can be sliced comfortably without having to strain or adopt an awkward position.

If the entire jamon is to be consumed in a short space of time (1 or 2 days), begin slicing at the thickest part or "maza" (a). Begin by mounting the jamon in the holder with the hoof facing up, as shown in the photo.

If it is going to be consumed slowly (more than 2 days) it is better to begin slicing the narrower side, or "contramaza" (b), so that this area does not end up becoming too dry. To slice the jamon this way, have the hoof facing down. 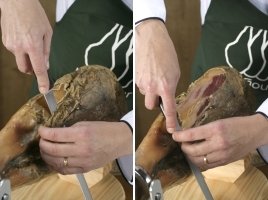 Before beginning to slice the jamon it must be trimmed; i.e., skin and the outer fat covering the area to be cut must be removed until the meat underneath is visible.

On the outside of the jamon are natural moulds and exudates which occur naturally during the curing and maturation process, and which must be removed from around the area to be cut to avoid a rancid flavour.

If the jamon is to be consumed the same day the skin and fat may be removed completely; if not, they should be removed as needed around the area to be sliced. 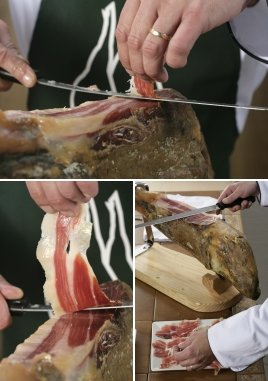 Cut fine (almost transparent) slices, the width of the jamon and 6 to 7 cm in length. As you slice deeper, remove the skin and outer fat from the sides.

Make parallel slices, away from the hoof. The cut surface should be flat, without ridges.

When you reach the bone, cut around it so that subsequent slices detach easily.

The meat nearest the bone should not be sliced, but cut into "tacos" or small chunks, used to enrich soups and stews.

Slicing along the knuckle (d) to obtain jamon chunks.

Cutting the meat into small chunks

When all the meat has been removed from the larger side, turn the jamon so that the hoof is facing downward.

Changing the position of the jamon

Cutting with the small knife

Place the slices on a plate in a single layer, slightly overlapping if desired. 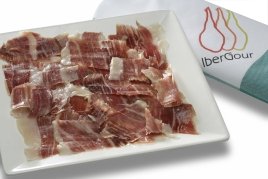 The jamon bone itself is also an excellent ingredient, adding flavour to broths, soups and stews.

For use in cooking the bone is sawed into medium-sized pieces (roughly the size of a fist) which can be frozen for future use.

How to slice a shoulder cut ("paletilla") 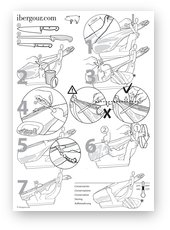 First remove the outer rind, moulds and skin near the area to be cut, just as you would with the hind leg.

In the case of the shoulder, however, small knives are normally used to cut the meat nearest the bone, whose flavour is considered particularly succulent. 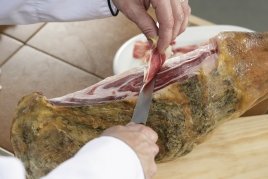 Keep the free hand above the knife

Not everyone carves a jamon the same way. The "classic cut" is what we have described in the preceding section. It is the most common and is done from hoof to butt end. Slices can be cut very thin but it requires an extensive carving area, so the piece will gradually dry out.

Crosswise carving is more like the way fresh meat is cut. Carving starts at the butt end and continues perpendicular to the bone (see images). It is called crosswise carving because the muscle is cut in cross section instead of lengthwise. 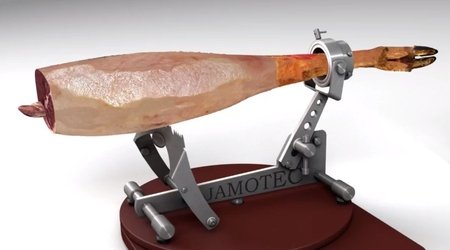 Jamon resting on the stand bracket (the part with the saw-tooth top) of a Jamotec F1 jamon holder, showing the crosswise cut. 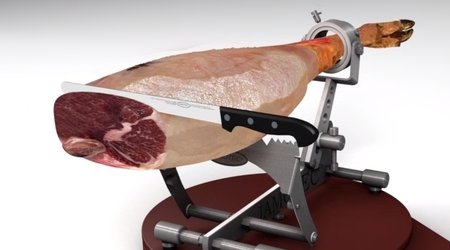 Example of carving a jamon crosswise.

Cutting thin slices require much practice, although this is not a problem for many consumers. Some people prefer somewhat thicker slices.

This system was very common in the past and has some advantages:

Today there are few ham stands that can be used for carving a jamon this way. IberGour sells the Jamotec JP Luxe and the Jamotec F1, both of which have a support bracket that facilitates crosswise carving.

The preferred metal for jamon knives is stainless steel, for its flexibility and resistance, although it requires frequent sharpening. For this reason, before slicing the jamon it is recommended that the knife be sharpened with a sharpening steel (a file that removes irregularities from metal) or a whetstone.

As shown in the picture, with the blade of the knife tilted at about 20º, place it against the upper part of the sharpener and slide it smoothly downward, making sure that the entire knife blade comes in contact with the file. Repeat, this time with the other side of the blade, and continue to do so in succession until the knife is well honed.

Tilting the knife blade,
and movements made to sharpen it

Honing the knife with a sharpener,
or sharpening steel

If you use a whetstone, sharpen the knife by pulling it backward (not forward against the cutting edge), then lift the blade and place it back in the starting position. It is important to leave the whetstone to soak in water for at least 2 hours prior to using it.

To finish, wipe the blade with a knife to remove any metal dust which could otherwise lend an off taste or colour to the meat slices. 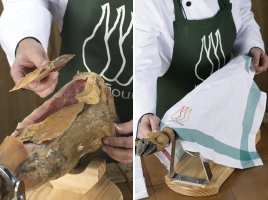 Neither hind leg nor shoulder cuts require special storage conditions, although they should be kept in a cool, dry place (between 15º and 25º), preferably hanging, or on a ham stand.

Any jamon that is cut should be consumed immediately, or wrapped in wax paper or cling wrap to avoid contact with air. In any case, it is recommended that you cut only as much as will be consumed.

Each time you slice the jamon, protect the cut area with some of the larger pieces of lard and rind, so that the fat on the surface always remains fresh.

To further protect the jamon it is recommended that you cover it with a clean dish towel.

To enjoy all of the flavour and aromas of Iberico bellota jamon, it is best to eat it only with some bread. Red wines, aged (crianza) or not, and moderately aged (crianza) dry whites with moderate acidity are a good accompaniment. In any case, the consensus among experts is that the best matches are fino and manzanilla sherries. Finos offer aromas that combine well, are smooth to the taste, and have low acidity and a hint of saltiness. The initial bitter taste of the fino sherries also combines perfectly with the slightly bitter flavour that develops in the fat of the jamon during maturation.

Beer is not only an excellent choice to accompany dishes that are hot, acidic or very spicy; it also goes very well with jamon, and all kinds of smoked meats and sausage.

Italy: Brunello de Montalcino and Chianti Classico, produced in the province of Siena, are two of the world's major wines, combining perfectly with Iberico "bellota" jamon.

France: Look for rosé champagnes (the Chardonnay, Pinot Meunier or Pinot Noir varieties), which combine as well with jamon as they do with desserts or appetizers.

Jamon is an excellent ingredient that is widely used in Iberico cuisine, appearing in both traditional dishes and in the modern culinary creations of prestigious chefs.