Reduced shipping for orders starting at £150.00 - bound for England.More on shipping
Delivery to the UK is now interrupted.
We expect to resume serving orders to the UK in the next few days.

Jamones of the finest quality come from pigs of the Iberian breed, characterized by their dark coat and black hoofs, thus giving rise to the familiar name "jamon pata negra", or "black hoof ham", by which they are also known.

To prevent abuses, the term "pata negra" (black hoof) has been limited to top-quality jamones since 2014. These two words can be used on the label only if the following requirements are met:

Nonetheless, all Iberian jamones are popularly known in Spain as "pata negra", whether pure or crossbred and no matter what their diet.

Origin of the Iberian breed

The Iberian pig (Sus Scrofa Mediterraneus) whose unique origin can be traced back to ancient times, is found in herds clustered in the central and southern territory of the Iberian Peninsula.

The most commonly accepted theory is that the first pigs were brought to the Iberian Peninsula by the Phoenicians from the Eastern Mediterranean coast (current day Lebanon) where they interbred with wild boars. This cross gave rise to the first Iberian breeds whose origins, in this case, can be traced back to about the year 1000 B.C. 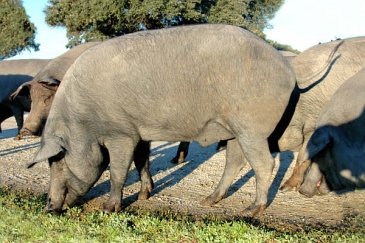 These varieties have similar genetic characteristics; the Manchado de Jabugo (spotted pig) is the farthest removed, having originated in the early 19th century as a result of interbreeding of foreign (probably English) breeds with the local population of Iberian pigs.

Jamones from the Entrepelado and Lampiño varieties are the most marbled with fat, giving them greater flavour and aroma than jamones from other Iberian varieties. Torbiscal is the result of a fusion of four ancestral breeds. The most widespread varieties are Retinto and Lampiño.

During the 19th and 20th centuries crossbreeding with imported breeds was attemped with the aim of increasing productivity of the animals (shorter growing periods, higher carcass weight, etc.). In extensive farming the results were not particularly promising, in general because of insufficient adaptation to the environment.

The most successful crosses were Large Black-Duroc or Duroc-Jersey, in particular. The Duroc-Jersey cross is admitted by all of the Designations of Origin, as long as the percentage of that breed is not greater than 25% (the remaining 75% must be pure Iberian). In 1961 the first Duroc-Jersey swine were imported from the United States by the Spanish Livestock Selection Coordination Board (Junta Coordinadora de la Mejora Ganadera de España). The animals' reddish coloured skin enabled them to adapt well to the intense sunlight, as became apparent during their first summer in Extremadura.

The most notable difference between Iberian and cross breeds is seen during grazing. Iberian pigs constantly explore the terrain, as they selectively, instintively forage for available resources. Cross breeds, being less selective, are also less active.

As for performance, the Duroc-Jersey cross is more prolific and develops earlier, with a shorter production cycle and less fat, larger litters and higher weights both at weaning and during the fattening period. It has a lower percentage of lard and a longer carcass; the disadvantage is that jamones are of lower quality.

At present Iberian pigs are grown in the southwestern part of the Iberian peninsula, predominantly in Extremadura, Andalusia (especially Cordoba, Huelva, Seville and Cadiz), Salamanca and Portugal. Extensive farming calls for a specific ecosystem - the "dehesa", as it is known here - characterized by extensive tracts of land with sparsely populated woods of holm and cork oaks, found only in these regions. 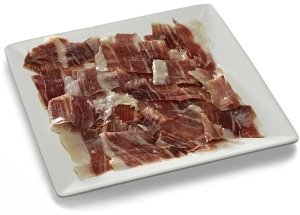 Legend has it that jamones were created when a pig one day fell into a gully with very salty water, and drowned. Shepherds found the pig and roasted it, discovering that the meat - particularly the hind leg - had a pleasant flavour. Later they discovered that when the hind leg was salted it lasted longer without losing its flavour, and the method was thereafter perfected. Today, jamon constitutes one of the world's most exquisite products.

"Pata negra" jamones are elongated, and the leg above the hoof is long and slender. Colour ranges from rosy to purplish red. They have aromas that are intense, pleasing and highly nuanced; their flavor is very delicate, with the faintest hint of saltiness. The flesh is smooth, and the fat is lustrous and soft to the touch.

A jamon should be cut into very thin slices. For this purpose you should have a proper jamon knife, sharpener and stand, and follow slicing recommendations to enjoy it in optimum conditions.

The quality of a jamon depends mainly on the pig breed and how and what it has been fed. The more pure the breed and the longer it has lived in the woodlands eating acorns, the better the jamon will be.

The law requires this information to be specified on the label and expressly bans using brand names that may confuse the consumer. For example, if the pig has not eaten acorns and has not been reared on the open range, the jamon may not be sold under a brand containing words such as "bellota" (acorn), "dehesa" (open range or woodland) or "encina" (holm oak).

The former "recebo grade" has been eliminated by the new 2014 law. It covered jamones from pigs fattened in woodlands eating acorns and compound feed supplement. They are now either "bellota grade" or "cebo grade".

Inspection and monitoring are carried out by private companies accredited by the government. Breeders must hire them to certify that their facilities and procedures meet the legal requirements. 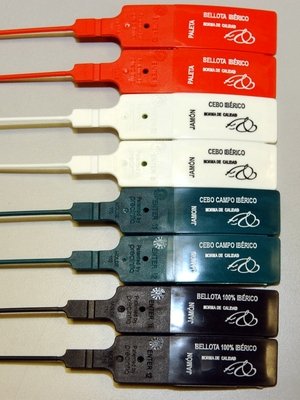 Up until the end of the 20th century the names "Jamon Iberico" and "Jamon Pata Negra" were often used indiscriminately to refer to pigs that were in fact crossbreeds. To avoid consumer confusion and prevent unfair competition, initial minimum standards were imposed on the market by Royal Decree 1083/2001(spanish), stipulating that animals whose production was included in the legislation were required to have a minimum of 50% Iberian blood (from pure Iberian breed sows).

Under this legislation, products regulated by these quality control standards could only be obtained from the offspring of pure Iberian breeder sows and breeder boars that are pure Iberian, Duroc, or Duroc-Jersey, or a cross of those breeds.

The legal measure currently in force (Spanish Royal Order of April 2014(spanish)) requires the following information on the label:

The same legal measure specifies that the security seals on the shanks must be of different colors in order to distinguish clearly between the different products:

The designation "Pata negra" (black hoof) may be placed only on labels of 100% Iberian Bellota pieces. And "dehesa" (woodland) and "montanera" (free-range fattening or finishing period) on Bellota grade pieces.

AECERIBER(spanish) (Asociación Española de Criadores de Ganado Porcino Ibérico Puro y Tronco Ibérico) as well as some universities in Andalusia and Extremadura are carrying out intensive research in the Iberian swine sector. The results of their studies can be found on the following websites: