Jamon is the result of curing (salting and drying) the hind leg of a pig. Jamon Serrano means "ham from the sierra", referring to the mountainous areas that are the best places for curing jamones. The product is known as a "paleta" (shoulder ham) when it is made with the foreleg.

The jamón serrano designation has been protected as a Traditional Speciality Guaranteed (TSG) since 1999 under the European Union Regulation 509/2006.

Characteristics of the raw material

Jamones are the hind legs of pigs. They include the hip, femur, patella, tibia, fibula, tarsal bones and, optionally, metatarsals and phalanges, and the muscle and fat surrounding them.

The entire curing process, from slaughter to drying, takes place according to current European Union legislation (Directives 64/433/CEE and 77/99/CEE).

The most commonly used breeds are Duroc, Pietrain, Landrace and Large White, fed a diet of compound feeds made mostly of cereals. The pigs do not necessarily have to be of Spanish origin; the jamón serrano TSG is a EU regulation that covers only the processing method. 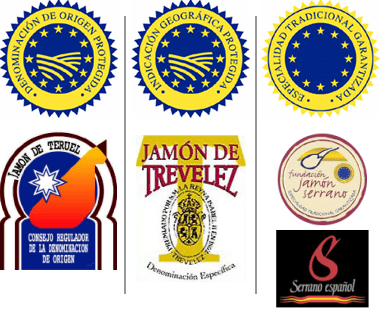 Although all types of Spanish jamones are known internationally as "Jamon Serrano", in Spain the term is usually used for jamones from pigs not belonging to the Iberian breed (typically white pigs).

The following are the basic determining factors for types of Serrano jamon:

The climate conditions in some parts of Spain facilitate long curing times without using much salt.

Grade (not applicable to jamones from Teruel or Trevélez)

The longer the drying time, the higher the grade, because aging imparts stronger, richer aromas. 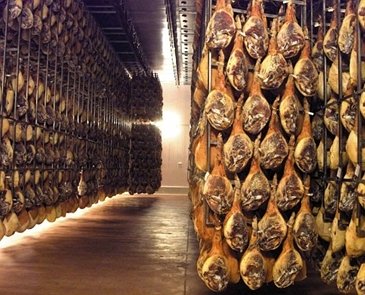 After the pig is butchered and the jamones removed, the temperature inside each piece is brought down to 3º C, and any blood remaining in the vessels is drawn off using a pressure process.

The jamones are rubbed with nitrifying salts and then covered with sea salt to remove the moisture and preserve them.

The salting time depends on the weight, fat content and shape of the jamon and ranges from 0.65 to 2 days per kilogram of jamon weight. The temperature is kept between 0 and 4º C and relative humidity between 75 and 95% throughout this time.

Before salting, the week and year of salting are fire-stamped on the rind.

The salt residue on the jamon's surface is removed using brushes. The salt must be eliminated from the outside so the jamon will not be too salty and to ensure that it will not inhibit the growth of bacterial flora.

Once the jamon is left without the protection of the salt it is subject to bacterial contamination, environmental agents and parasites and may spoil. This is why it is so important to keep the facilities spotlessly clean and maintain a very low temperature.

At this stage the jamon is still tender and occasionally it is reshaped to make it look more attractive.

During this stage the salt spreads uniformly throughout the inside of the jamon, inhibiting undesired microbial growth and channeling the biochemical processes of hydrolysis (lipolysis and proteolysis) that give the jamones their characteristic aroma and taste.

Over a period of 30 to 60 days the water content gradually diminishes and the jamones acquire greater external consistency.

While the jamones are drying the temperature is raised gradually from 6º to 34º C and the relative humidity is lowered to between 60% and 80%. This favors slow drying of the jamones, sweating (natural diffusion of part of the fat from the adipose tissues) and the emergence of aromas caused by alterations in proteins and fats.

The jamones spend at least four months in this stage.

During this period, which lasts from 6 to 18 months, the biochemical processes initiated earlier continue, with the intervention of the microbial flora that gives the jamones their particular aroma and taste. Every Jamon Serrano is cured for more than seven months.

When the jamones come out of the aging room they have lost at least 33% of their initial weight and can be stored at ambient temperature until they are eaten, without needing to be smoked or coated with paprika or other spices. A whole Serrano jamon has no expiry date, although it is best to eat it within six months after it comes from the aging room. 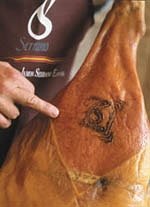 Jamon with a V-shaped cut. The skin is removed from the lower part of the jamon by cutting in a V shape, which is also known as the Serrano cut.
Photo: Consorcio del Jamón Serrano Español

The fat is glossy, white or yellowish and aromatic, with a pleasing taste. It is found on the outside edge of the slice, except in jamones from Duroc pigs, which have thin streaks of marbling fat in the flesh.

More information on the nutritional properties of jamon.